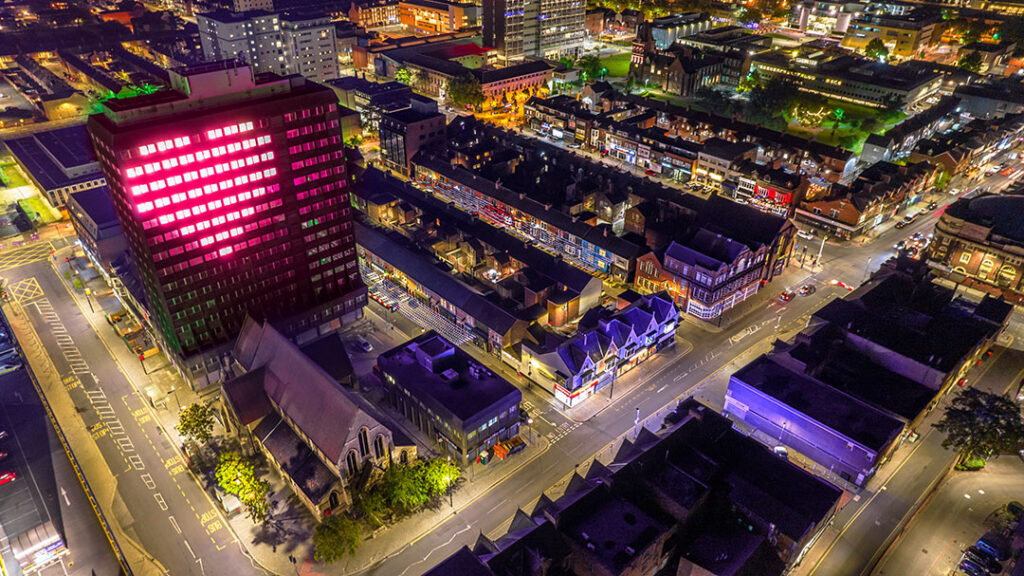 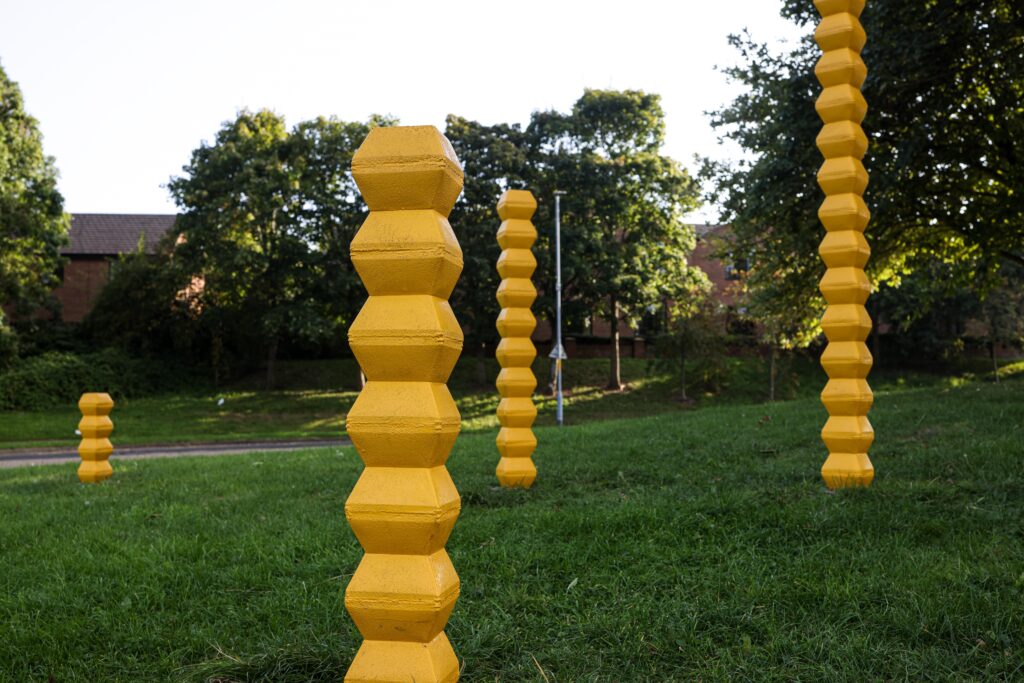 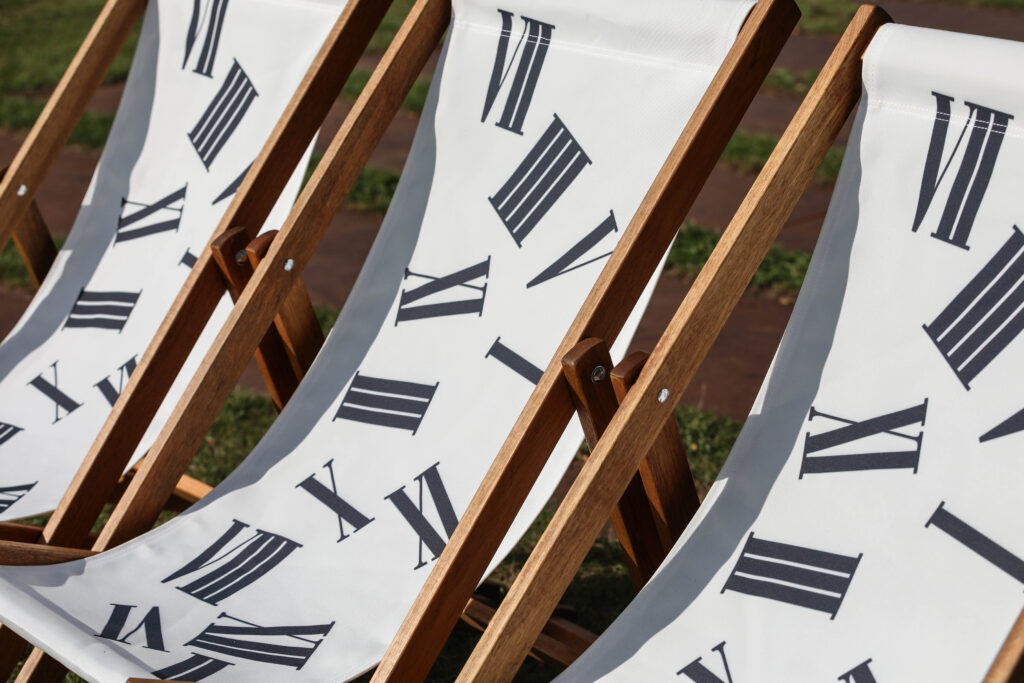 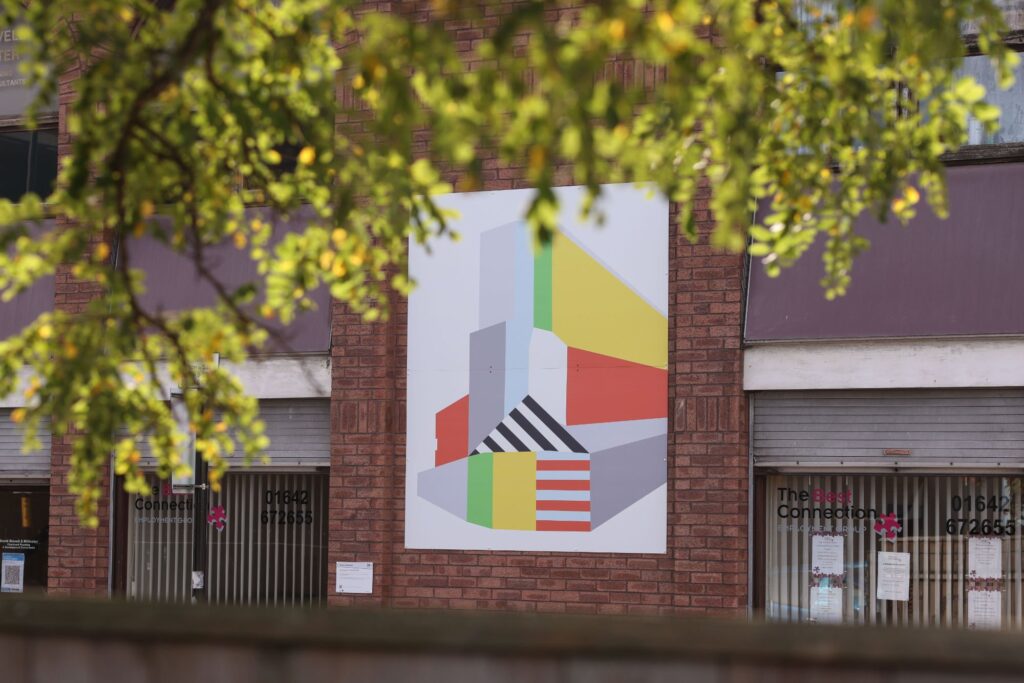 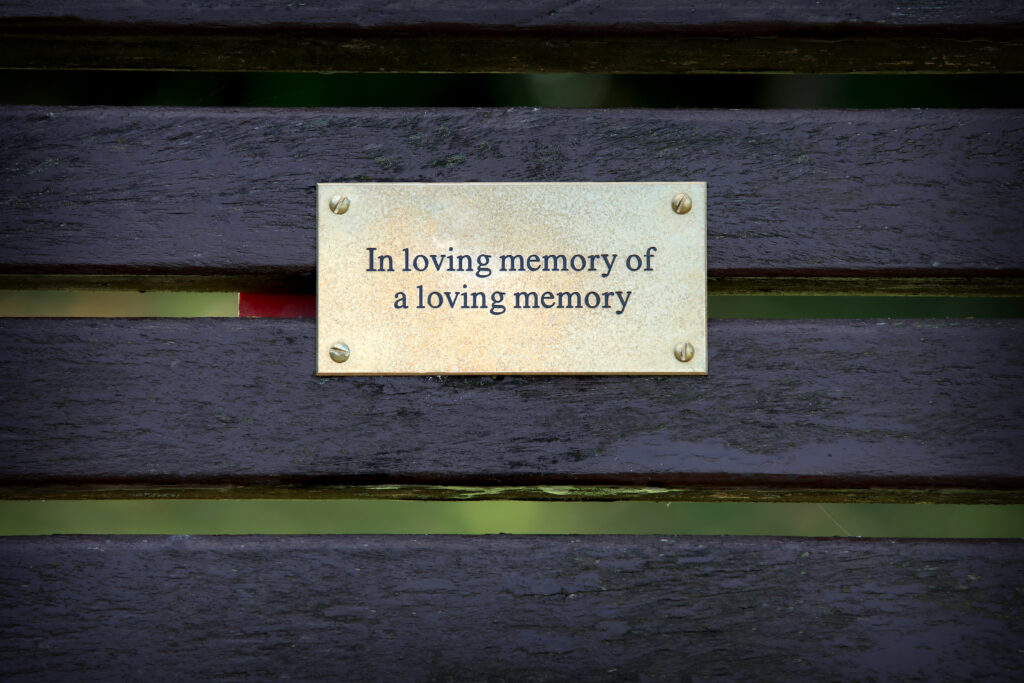 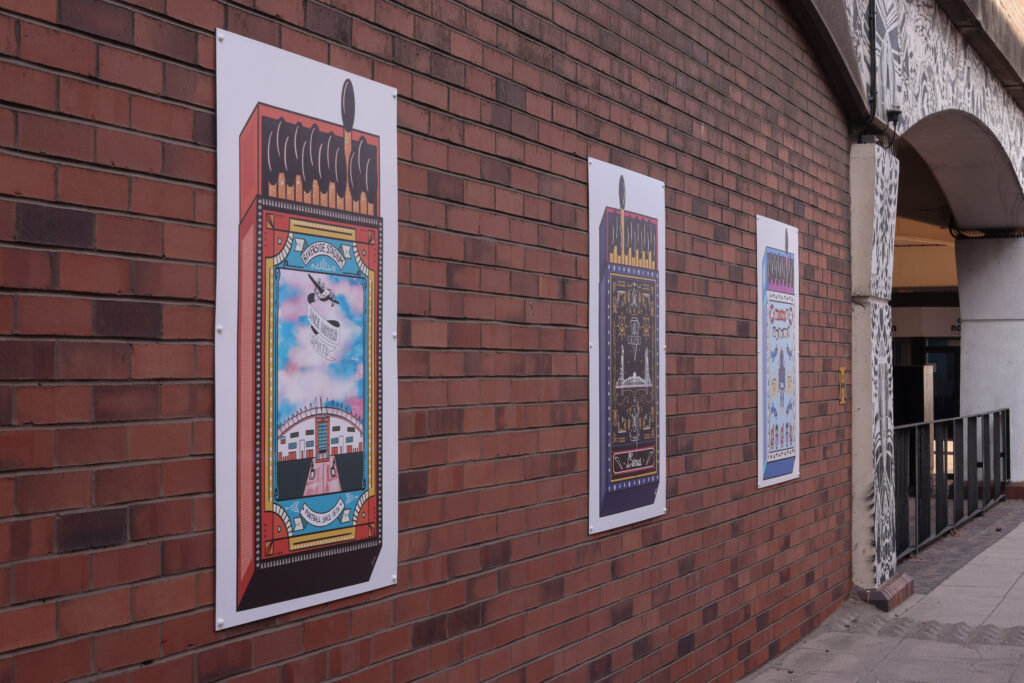 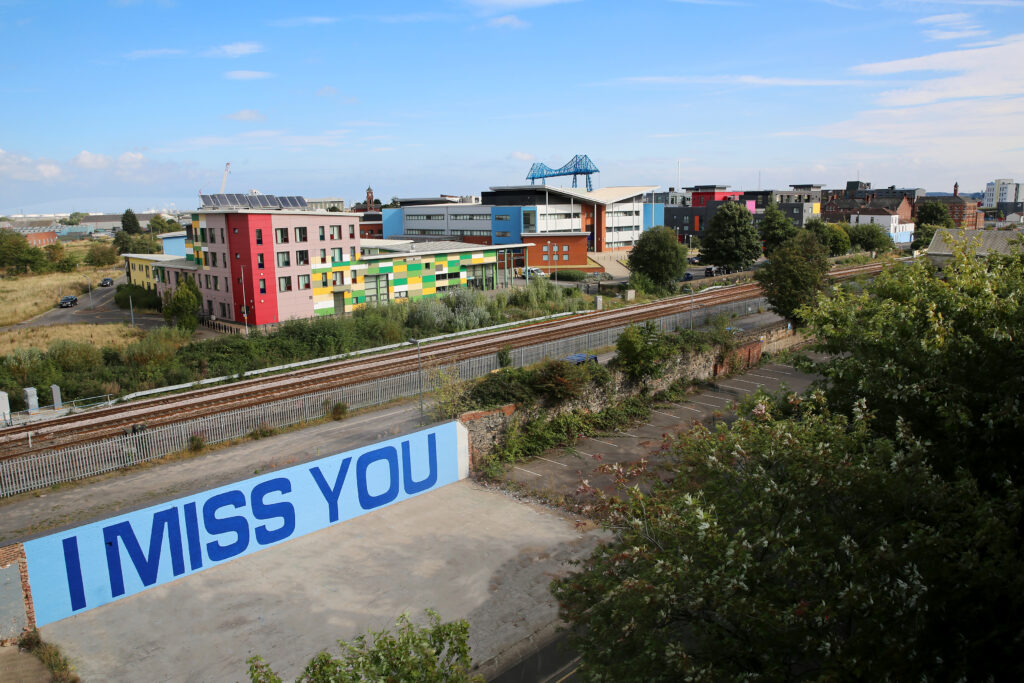 A series of temporary and permanent public art works commissioned by Middlesbrough Council and produced by Navigator North, with support from Art Council England’s Cultural Recovery Fund. The commissions aim to engage and connect communities post Covid-19, to see existing cultural and heritage venues in new ways and to promote play to enrich and transform the use of Middlesbrough town centre.

Find out more about the artworks and where to find them, below.

The pulsating heart of light contained within Church House is an artwork which aims to promote a message of positivity to the people of Middlesbrough and beyond.

Artist Stuart Langley has animated the empty building to encourage us to look beyond the prescribed use of spaces, people and things to imagine a more creative and exciting future.

Roof of the Dorman Museum

Around 3.35pm is a neon artwork designed by artist Mark Gubb. The work takes as its key reference ‘The Middlesbrough Meteorite’. On 14th March 1881, around 3.35pm, workers on the ‘Pennyman’s Railway Siding’ (now Roseberry Park) heard a rushing sound, followed by a thud. Further investigation revealed a meteorite had crashed to the ground. It was dated to around 4.5 billion years old, meaning it was formed at the same time as the Earth.

After Warsama by Dominic from Luton

Station Road adjacent to The Auxiliary

After Warsama takes the legacy of Abdillahi Warsama, the legendary local owner of Bongo Club International, as its celebratory starting point.

Warsama was a Somalian immigrant who was once refused entry to a nightclub in London due to the colour of his skin. In the 1960s, he found solace, a home, new friends and a new life in Middlesbrough. With the creation of the extraordinary Bongo Club International, Warsama created a new scene, inspiring a series of countercultures and a destination point, excelling as an invitation to all people of all races, much like the location of the club which is situated in a part of the town known affectionately as ‘over the border’. The font for ‘I Miss You’ is also identical to that of the Bongo Club, its shades of blue symbiotic to the nightclub itself.

After Warsama pays tribute to the club, remembers Abdillahi but essentially reaches out to anyone, as a universal message. The work invites you to consider absence, loved ones past & present and to pause, momentarily, to reflect within ourselves.

Resonant of a past age, these redundant yet iconic phone boxes  have become triggers of memories for an older generation and perhaps objects of curiosity for a younger generation.

They signifying a transition, or leap, from an analogue world to a digital world, from objects full of life and sound to the silent relics  of today.

Now, for the dark winter months the artist has reactivated them using light, colour, sound and movement.

In Loving Memory by Oliver Bragg

In Loving Memory is a series of engraved brass plaques by artist Oliver Bragg, fixed onto benches throughout Middlesbrough’s Albert Park.

The plaques have been inspired by tales of local legends and anecdotes and fabricated to mimic those that often adorn benches to memorialise or pay homage to a specific person.

Boro Through Time by Sofia Barton

Boro Through Time, explores Middlesbrough’s rich culture and heritage, using designs inspired by Victorian matchboxes. Themes illustrated include the match boxes of Erimus (remembering the motto of the city) , Orange Pip festival (community), The Bathhouses (Victorian luxury), Football (Middlesbrough FC) and of course the Toyshop that everyone remembers.

The works draw on collective nostalgic memories to celebrate what makes the city shine.

100 deck chairs designed by the artist

Appearing at events in the Town Centre over the next year.

Offering a space to contemplate how we experience patterns of time, Time Management is a site-specific artwork by Colin Priest consisting of 100 deckchairs designed by the artist  and a short animation inviting everyone to sit back, pause for a while and escape their schedules.

Through research into Middlesbrough Town Hall  and its emblematic clock, conversations revealed the variety of ways our everyday lives are measured from alarm clocks to meditation, safety inspections to virus scans, screensavers to last orders. Meanwhile these last months, we have also recalibrated our relationship to time; the natural world and built environment anchoring our collective sense of place.

Here and now, as time flies around us, where numerals cascade and pareidolic clouds roll, how might we keep time?

Albert Park, Stewart Park and near the Parkway Centre

Endless Convenience is a series of sculptures cast from plastic supermarket food containers. The columns have been made from recycled car tyres and glass granules.

The artwork comments on society’s reliance on convenience food and plastic packaging.

As part of the project, Andrew worked with Year 5 children from Lingfield Primary School in Marton, who created their own smaller plaster versions of the Endless Convenience sculptures using plastic containers they had collected.

Carpark Stairway is a painting that references the external concrete stairway that leads to the Cleveland Centre rooftop car park in Middlesbrough. The painting’s strong composition mirrors the actual structure of the stairway, the artist has then added a selection of bold colours and patterns to create a dynamic image.

We Walked Out of the Wilderness by John Ayscough

A celebration of economic, cultural and civic achievements since then, this work is intended as reconciliation with the past. It celebrates the town’s heritage, but crucially looks forward and suggests positive change and better times ahead. The work is the beginning of something new; placing the trauma to one side, it is a beacon for our collective imagination, wellbeing and prosperity. This neon light work is inspired by an iconic photograph taken by Evening Gazette photographer Peter Reimann 32 years ago, showing Margaret Thatcher ‘walking into the wilderness’ on what was the site of the former Head Wrightson engineering work in Thornaby.

(Commissioned by The Auxiliary and produced by Navigator North)